Knight Story is a puzzle RPG game for mobile. It is similar to Puzzle and Dragons in away except you are a knight trying to rescue the princess. As of right now there is 125 different levels to complete. As of this review I am on 113. Knight Story has am average story but the humor is what this game makes up in. Some of the lines from the Knight and monsters are generally pretty fun while some are "roll your eyes" funny. A lot of the bosses are unique and also have their own dialogue. Knight Story involves you matching up different colored orbs to perform that elements attack. There is also an element guide on the top of the battle screen to tell you which element is strong against each other.

During your puzzle adventure you meet a lot of decent characters, find weapons and new spells to help you on your way. If you play often enough without waiting to collect your daily gold reward you will get overpowered very quickly. There is the option of buying in game currency but it shouldn't be dependent on it so much. A lot of the battles I was finding myself losing very often until I waited the set amount of hours, several times and gathered enough gold to upgrade my weapons so I would have a chance. 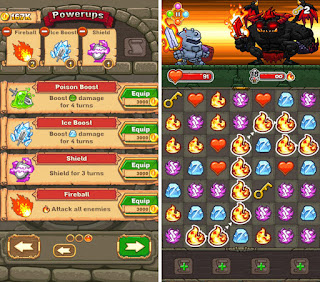 The levels in Knight Story are not all the same though. Some have you collecting items while trying to stay alive against a large enemy or the normal slaying your enemies to progress. It doesn't look like they will be adding any more levels, it's been several months with no updates which is kind of disappointing. Overall Knight Story is a good, quick pass time and recommend if you're into puzzle RPG's.

Posted by codysreviews at 8:00 AM