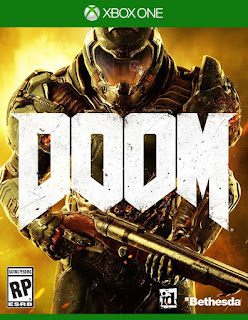 Doom is finally out after all of these years since DOOM 3. I've been a DOOM fan since I was 7 years old in 1996 and was excited to buy this physically on Day One. Let me tell you, it was worth the long wait. DOOM is a franchise which takes place on Mars and Hell. You play as the notorious DOOM guy who is just badass all around.

You start the game waking up which looks like to be some sort of tomb or crypt. As soon as you get up your put on the suit and all hell breaks loose. The story is a basic but decent story, you usually do not play DOOM for the story though. It's all about feeling like a god and destroying hundreds and hundreds of demons. This game is no different. Besides the beautiful visuals this game is fast paced and plays a lot like the classic DOOM. You even have the option to changing your field of view like in the original DOOM. This version of the game introduces some nice mechanics including the rune trials, access to classic DOOM maps, a skill and gun upgrade system. 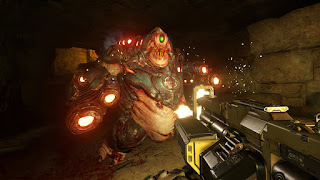 Each level you play has secrets. Within these secrets you might fine some collectibles or even some suit upgrades. You can use these suit upgrades for many different things. One example is reducing the damage you receive from exploding barrels. Each level also introduces you to combat skill points which a rewarded by completed in game tasks which is different on every level and by slaughtering demons. You use these skill points to power up your many guns and unlocking their masteries. Unlocking the masteries are not unlocked with your skill points but by performing other tasks. It's a pretty good system overall.

On top of that there are collectibles to find in each level. Every level has little figurines of DOOM guy in different suits. Whenever you grab one it plays the classic DOOM sound as you're looking at it. It makes it feel like DOOM is an open world game when in fact it is not. But it makes the game much more explorable with it's HUGE maps. On top of that you  are also able to collect codex's and learn more about the story. 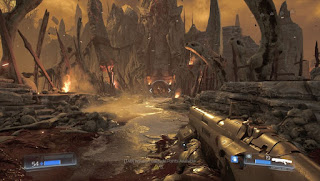 Glory kills is also an excellent new mechanic in DOOM which is very useful on the higher difficulties. Whenever you weaken a demon you will notice it glows red and blue. That is the indication that you are able to press the melee button and perform a glory execution. When doing so the demons will drop health and sometimes ammo. Another good way of getting health and ammo back is killing demons with your chainsaw. The chainsaw has very limited ammo but it's a great way to get back your weapon ammo if you're running low during a battle.

The boss battles are a ton of fun! Without spoiling who they are (should be obvious) let's just say they are huge and some require some time and strategy to take down. There are a total of three bosses in the campaign all with badass music and fun ways to take them down.

When you go onto the main menu of the game there is another mode on the right side of the campaign. This is called Snapmap and it's great. Snapmap is kind of like forge from Halo but with this you have a lot more customization when building your own map. With snapmap creators have the opportunity to create their own maps, modes, events, and decide to make it online, co-op or even just a solo map. Some can vary to demon waves, park our, music makers, etc... The list never ends. ID Software is also constantly adding updates to this feature as well. 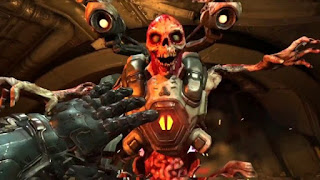 Lastly, I want to talk about the multiplayer. I personally love the multiplayer in this game and cannot get enough of it for the simple reason of it feeling exactly like Unreal Tournament and Quake. A lot of people have their complaints over the multiplayer but I don't see any reason not to like it. The only frustrating situation about the multiplayer are DLC packs mainly. At the time of writing up this review, the first DLC pack Unto the Evil came on on Friday, August 5th, 2016. Season pass holders for Xbox One have not been able to play because it will not unlock the content and Bethesda has stated they are working on it.....4 days ago and during double XP weekend which people including myself were unable to participate in with the new DLC. Besides the technical difficulties with the multiplayer, it's pretty solid overall.

Overall, DOOM is an amazing game and highly recommend it to anyone on any platform. Full of easter eggs, beautiful visuals, an amazing sound track, demons, action, guns, etc.... There is something for everyone in this title. I just hope they figure out this DLC content fast because people are getting very impatient including myself.

Posted by codysreviews at 8:00 AM