Sacred Citadel came out on the Xbox Live Arcade a few years ago. It was the most recent Games for Gold game on the Xbox 360. So I decided to do a mini review on it.

Sacred Citadel is a side scrolling hack and slash RPG. You have your choice in choosing which class you want to play as. These vary from a Warrior, Ranger, Wizard, or a Shaman. Each class has their own unique skills and abilities to use. Sacred Citadel is a short game with 4 different acts, co-op play, and challenges to increase the difficulty of each level. As you progress through the story you gain levels, new skills, new armor, weapons, and meet several new enemies which all increase in difficulty as your progress further through the story. 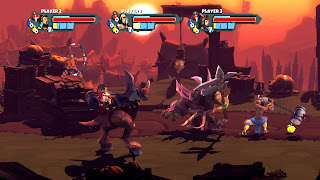 If you were to compare Sacred Citadel to another game it would be a more serious version of Castle Crashers. Just like Castle Crashers this game is enjoyed more with a friend. Sacred is a fairly challenging game but can be beaten in roughly two hours. Each class is unique so beating the game with all classes is recommended totaling up between 8-10 hours of gameplay, solo.

If you enjoy 2D side scrolling RPG's then I recommend you try this game out for yourself. It isn't a fantastic game but definitely a good game to kill some time with. Soundtrack is good, combat is fun but does get repetitive. The enemies are fun to kill except for the few really annoying ones. It would been great to have some sort of crafting system in place.

Posted by codysreviews at 7:00 AM