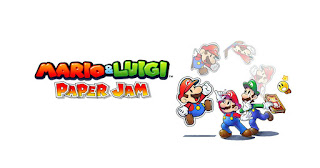 Mario & Luigi: Paper Jam is another entry in the Mario & Luigi RPG series this time releasing for the Nintendo 3DS. Paper Jam is another Mario & Luigi game which combines the Paper Mario universe as well. You control Mario, Luigi and Paper Mario using A, B, and Y for each individual character. This also introduces a new bros. style which is called Trio Attack. This allows all three characters to perform a special attack similar to the Bros. Attack. Paper Jam also adds in one more additional block during combat. This is called the "Copy Block". When hitting this block you create up to 6 additional paper Mario's to stack up beside each other to perform stronger attacks. Instead of the normal two jumps you can now jump 6 times on each enemy. It is weaker but overall a bit better than Mario or Luigi's jumps. 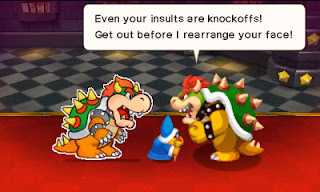 The main villain of Paper Jam is once again, Bowser. This time you need to rescue both Peach and Paper Peach as Bowser and Paper Bowser have captured them vowing to destroy the Mushroom Kingdom once again. Paper Jam starts off like it normal does in the series previous to this one. Give's you a quick tutorial on how to play, control each bro, and combat tips. As you progress through the game you retrieve new specials, and Paper Mario. Each time you receive something new the game does a good job explaining the purpose of each new mechanic. The special system is also amped up a bit where you can practice or demo each special move while you are in combat and you can practice as long as you'd like. Really great for newer players to the series.


In Paper Jam you explore big open areas, battle lots of enemies, and gain levels to make your characters stronger. The ranking system has made a return and is based on your levels. Unlike the previous entry the ranks in Paper Jam do not allow you to visit different stores based off your rank. There are ranks and each rank allows you to unlock a stat boost, or an effect to make your characters stronger. The story overall is average to say the least, the humour is still there with a lot of little hidden pieces that make a good laugh. Combat is good as always just would've been nice to have more "gear" options like a traditional RPG. Unless you are a dodging maniac you need to fight every enemy you come across in order to take down the bosses reasonably. 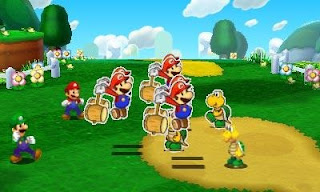 The Power of the Copy Block

Paper Craft battles is another new mechanic to Paper Jam which feels it doesn't fit at all. They are boring, time consuming and offer next to no challenge. There are about 5 paper craft battles which you need to do. Whenever I came across one I was tempted to turn it off a couple of times. It's always great to try new things but this one was not cut out for Paper Jam. Paper Craft battles are basically giant paper statues of Mario Characters. Each battle you enter you receive a different character with different abilities. Most of the time it simply involves stunning an enemy and jumping on top of it to do damage.


Overall, Paper Jam is another welcomed Mario & Luigi game for the 3DS. Not the best in the series but not the worst either. Combat is smooth controlling three characters at once, a lot of the specials are reused from previous games. Trio attacks are really fun and do huge amounts of damage. Challenges make a return with thee different modes. Paper Craft battles, Boss Battles, and Specials Challenge. Paper Craft does fill the itch like all previous entries have done. I recommend you pick this game up. It roughly has 30 hours of gameplay in order to beat it, not including challenges, and achievements.

Posted by codysreviews at 4:48 PM