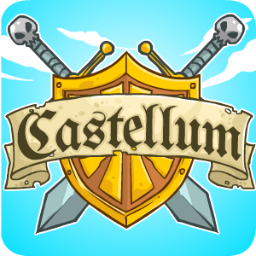 Castellum is currently in it's alpha stages and I hope to be along during the Beta and full release of Castellum. I was one of the lucky ones to get invited into trying the alpha version and was asked to do a mini review. Remember this is an alpha which means it is subject to change at any time.

Castellum is an arena based RPG where you pick your type of warrior and enter them into battle. Each battle is automated almost like Punch Club. After each fight you earn resources to use to improve your fighter with better equipment and new skills. During the alpha test a lot of the game was limited to what I was able to do. For the most part I was able to experience the core of the game. After a few attempts at playing Castellum I got a good feel at what the game was trying to accomplish. The gameplay offered is a smart decision because it keeps the player entertained for hours depending how much content gets added into the full game. After awhile the battles can get a little stale as you watch the same animation over and over with the odd time use of a skill.

Some other features that Castellum has is an Arena where you can fight against other opponents including your friends or the best of the best. Each fight will cost you a ticket. Other players are able to challenge you while you're away as well. There is also a mini game building. This feature is not implemented in the Alpha version. There is a bar where you can join clans and gain followers. Not available in the Alpha version as well. There is a shop where you can buy various armors, weapons, runes, and potions to help out on the battlefield! Lastly there is your character screen where you can change your equipment, improve your traits, earn new skills, and check your stats and inventory.

In conclusion I recommend keeping an eye opened for this lovely game when it becomes available. Lots of options, customization and really interesting art style. The audio is something I noticed right away as well. It is so cheery and suits this type of game immensely. You can tell the developer has put a lot of time and thought into this game. Really the only other criticism I can give is to make the battling animations a bit more entertaining or provide the player with something to do as you are fighting in combat. I also hope to see hundreds of different armors and weapons to give the player more customization options.

Posted by codysreviews at 7:54 PM