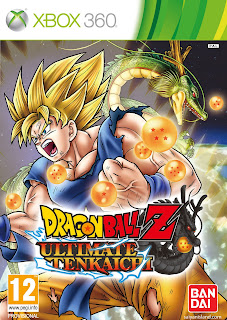 Console: Xbox 360, PlayStation 3
Genre: Action/Fighting
Release Date: October 25, 2011
Reviewed: November 15, 2011
Gameplay:
Dragonball Z: Ultimate Tenkaichi is a great addition to the DBZ video
game series especially for hardcore DBZ fans like myself. The fighting
style is completely new and revamped. Instead of health bars you now
have health numbers. You basically start at 50,000 health and it goes
down as your wailing on one another. The fight style is almost similar
to Burst Limit or Street Fighter if you will. The only difference is
you fly in the air. There are two fighting modes during the fights.
First one is "Blast Phase" which means you are in a phase where you
are able to perform ki blasts which are a lot more powerful than the
previous games. The second is "Combat Phase" which mean everything you
get close enough to your enemy a small cut scene will appear where you
both block each others kicks and begin the phase where you use melee
combat instead of your ki blasts. The combat overall if very well done
and is fun. They added a rock paper scissors element to it where say
if you perform a combo your opponent has a chance to counter that
attack based on which action you choose. If you counter then you punch
him out of the way and it cancels the combo. If you fail then prepare
to get your face bashed in.

During the fighting you can charge your ki like in the other DBZ
fighting games. But ki is used differently in Ultimate Tenkaichi. Your
ki is now used to acquire abilities to counter your opponents super
and normal attacks. While your charging your ki there are three icons
where your ki bar is. As the ki bar gets higher those icons light up.
They are, guard, evade, or counter. So if your opponent used
Kamehameha then you enter a small phase where you can choose how to
defend yourself against the attack depending on how much ki you have
charged up. So if you have it to the point where you have enough ki to
use the counter ability then you shoot another blast against the
Kamehameha and mash one of the buttons to over power your opponent. If
you succeed your blast will hit the enemy. If you fail then the
Kamehameha will hurt. The other ones are obvious where you can guard
to reduce the damage or evade to, well, evade the attack. If you max
out your ki bar you have an option to use that ki to get a boost in
attack. When it's full you use the up arrow on the D pad and you
unleash your ki. While your ki is unleashed your attack improves and
you are able to do additional combos. The only downside is when your
in this state your ki will slowly diminish. 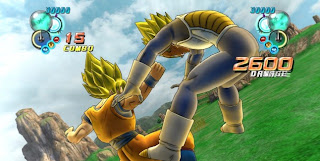 Destruction in the game has been improved. So when you unleash a
special attack your will blow a hole in the ground....a big one. When
you shoot a Kamehameha you will see the path it followed in the ground
to hit your opponent. If you use multiple blasts say with Gohan you
will see the mini craters in the ground. If you use to spirit
bomb.....say good by to half the planet. Big crater! Now although the
destruction is cool. It can get lame, boring and repetitive really
fast. Every time you use a special attack there is always a mini
cut scene of the enemy looking shocked and hurt and a big hole of
nothing where they are flying. This happens every time! Gets annoying.
But overall a nice touch.

Another feature they added are the big boss battles. One for example
would be when you fight Vegeta in his ape form. These are actually
pretty fun because you have to actually pull of certain techniques to
beat these big bosses. You also need to damage certain parts of their
bodies in each phase. If you do enough damage you enter a sequence
mode to avoid the big hits and finish them off. Another nice touch to
the game. 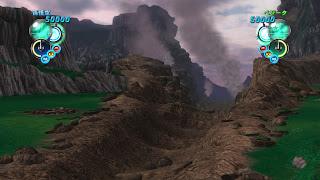 One other feature worth mentioning is the hero mode. In hero mode you
go on a little adventure with your created character. Now at first
when you create your character there are not a lot of options at all.
You have to unlock other costumes and features for your character as
your playing hero mode. You unlock things like hair styles, costumes,
logos, and voices. The further you progress into hero mode the more
goodies you unlock to use. Hero mode is a nice addition as well. You
go train and level your character up to make hm stronger. You need to
train because some of the key battles in hero mode are tough. If you
have very little health you will die fast. During hero mode you will
unlock sparring partners. When you unlock them you can face them a
certain amount of times and you unlock additional items to make your
character stronger. It is also how you unlock capsules to increase the
stats of the other characters like "health +1". Overall it is a pretty
fun feature but can be grindy and boring at times.

There of coarse are some bad things about this DBZ game. Yes, fighting
can get really repeatitive due to using the same combo over...and
over....and over again. The rock paper scissors feature can get very
frustrating especially if you lose alot. If you lose you get bashed
into an endless combo which hurts. Hero mode can be grindy and slow
paced. Big boss battles can also be frustrating if you missing an
action or trying to dodge the big fist coming for your face. If you
get hit....it really hurts.

Graphics:
The graphics in DBZ: Ultimate Tenkaichi are gorgeous. A huge
improvement to the last DBZ fighting game. They made all of the
environments big, colorful and full of life. They made each charcter
look two times better and their animations very smooth and great to
look at. The graphics, effects, and animations on the super attacks
like the kamehameha look amazing. It actually looks like it will do
damage and create a giant crater in the ground. When you unleash your
special attack a mini cutscene will appear showing your character
launch it from their hands. When it happens your jaw drops for a
second staring at how big the blast is. The you realise....."this is
going to hurt".

As mentioned above the destruction has been improved and the details
are great. When you create a huge crater you can see the electricity
from the blast surrounding the gian hole in the ground. The more you
damage the fighting area the more hectic it looks. If you damage it
enough the sky turns red/dark and looks like an epic battle took place
there.

Overall the graphics are very nice. It was nice to see them improve it
so much from the last game. Didn't think it would happen or it was
possible but they did it. Kudos to them.

Audio:
So I personally love the audio in DBZ: Ultimate Tenkaichi. It has
great music and great sound. When your blasting or punching someone it
sounds great and goes with the animation. Now the voice acting overall
is really great. It almost had all of the original voice actors from
the show and previous games....except a few like Gohan. Some of these
new voices are terrible. Gohan sounds like a woman smoking to much
cigarettes. Terrible and apauling some of these voices are.

Overall it has a good variety of music and sounds. Voice acting is
great...except for the few like gohan.

Conclusion:
Dragonball Z: Ultimate Tenkaichi is a great addition to the over the
top fighting series. They took the risk in doing something new and a
bit different. It for the most part worked. There are some flaws with
it that can be annoying and frustrating. These can be easily ignored
or over looked. The graphics got a huge improvement and everything
looks great. The audio is great as well except for some of the voice
actors. If your an over the top fighting fan or a DBZ fan in general
you will enjoy this game. Rent it first before buying. I personally
loved this game. Overall it is a good game, not amazing but good.
Enjoy!
Posted by codysreviews at 12:48 PM