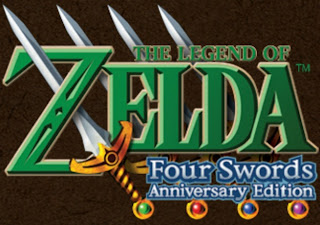 I would like to add one thing before going on with the review. Just wanted to let everyone know that this game is FREE. If you own a DSi or 3DS then you can download this game from the Nintendo Eshop for free. This game is offered free to the fans as an anniversary gift. As you all may know that this is Zelda's 25th anniversary, therefore, you receive a free game for being a loyal fan.

Gameplay:
This game is not the same game as the original Four Swords Adventure. This game was remade by Nintendo as an anniversary gift to all the Zelda fans. The gameplay is generally the same as in the original game. What I love most about this is the wireless capability. Remember with the original game you needed to play co-op with a bunch of link cables? Well now it's wireless; makes it a lot more fun. Lets start with the general gameplay then we will move onto the multiplayer portion.

Singleplayer:
If you play on singleplayer mode then you will control yourself as well as a secondary link. It plays as any typical Zelda game where you explore dungeons and defeat the boss at the end. With a secondary link you use him to help get through different puzzles that require two people to do it with. Instead of the secondary person you have a second link to control. You can throw him across obstacles and when you need him to hit a switch then you simply press the "L" or "R" buttons to control him. The point in this game is you need to save Princess Zelda once again from the evil Vaati, like in the original. You go through multiple dungeons to unlock keys to open the way to Vaati's castle to save the princess.

As your battling your way to get these keys you are exploring dungeons trying to grab as much rupees as you can. If you acquire a certain amount of rupees then you will unlock something (not going to tell you, will ruin the fun in it). Even when you beat the game you unlock something pretty cool! What I love about the campaign is once you beat Vaati you will unlock the "Forest of Memories". This is a fantastic edition to the game to celebrate the anniversary. The "Forest of Memories" has three levels to it just like all the previous dungeons you went through. What great about this one is you play through levels from the past games. The first one you play is the outside of Hyrule Castle from "A link to the Past" Zelda game. After you beat it you finish it off by going into the castle. The last level is the level from the very first Zelda game ever to come out. After you beat the forest, you unlock one final area.....all I'll say is that it's tough! Bring a friend, in fact bring three.

Multiplayer:
Multiplayer is the exact same thing as the single player. In multiplayer you and a friend, or friends (you can have up to four people play) go through the campaign and you all need to work together to solve a bunch of puzzles to get through the campaign. You and your friends go through and you all compete for rupees. If you end up getting the most rupees you win a medallion and if you get five medallions you unlock something for yourself. I find this game is much more fun with other people. You get angry and most of the time your laughing so hard.

Graphics:
The graphics in this game are the exact same as the original, but a little bit more updated. The art is well done as well as the environments within the game. Nothing to special about the graphics, just like the original 2D version. Still very nice and crisp animations and graphics. 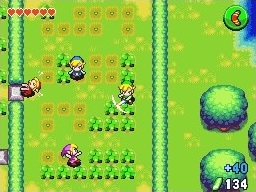 Have fun with friends!

Audio:
The audio in the game is outstanding. The reason being is because of the fact that every single Zelda song is in the game. From the classical levels all the way to the newer ones. In some way they use all of the music from the previous games. It makes the experience that much more enjoyable for you and your friends, especially if your a fan of the franchise. The audio for everything is nice and crisp, from swinging your sword to throwing your friend around, which is a blast by the way!

Conclusion:
Four Swords Adventure is an outstanding and an addicting game. If your a fan of great cooperative experiences or are a fan of the franchise then I promise you will NOT be dissapointed playing this game. For a free game, it is  very well done. Thank you Nintendo for giving your fans a fantastic game. Why not get this game? It's free!

Posted by codysreviews at 6:49 AM