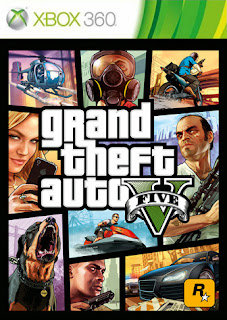 Gameplay:
Grand Theft Auto V is the fifth instalment for the GTA series. GTA V is the biggest video game launch of all time, shattering records. Within three days of the game being available, they made $1 billion in sales. GTA is a series that is very popular and strikes a lot of controversy with parents. GTA V takes place in the city of Los Santos, where the player controls three unique characters. Each character has their own story and own mission you can unlock in order to progress their story. Each character is easily switched to on the fly. What I did like about this feature is whenever you switched to one of the character you controlled, they can be in the middle of the most random events. You could be playing with Michael and decide you want to switch over to Trevor to do some of his missions. When you switch to Trevor he could be laying on a train track in his underwear, hung over. It is always different when you switch too one of the three. The city of Los Santos is huge. There are a lot of mission, side missions, events, clothing stores, jobs to earn money, sports, etc.... to do within the city. The possibilities never end it seems, there is always something to do which I do give credit GTA V for. GTA V, personally was a let down. The last two GTA titles have been very boring to me, with IV being the worse of the two. Yes, there is a lot of things to do but it gets repetitive, boring, and uneventful. I admit when I first put in this game I was excited to play it. I thought that Rockstar would finally fix their mistakes from the fourth GTA. At first I was having fun doing the missions, side missions, races, and exploration. I did everything I possibly could before completing the mane game. I was wrong. 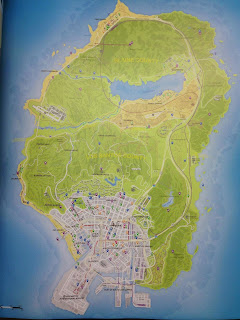 I feel as they lost their roots. My all time favourite was GTA III and San Andreas. I loved those two games a lot. Every since the fourth game I have been very disappointed in the series. Yes, there are a couple of things I did enjoy about the game. GTA V has a lot of humour as it always has. Each character has a unique story to them and you feel as you can relate to them or feel apart of their story. GTA V does a lot of things to make you feel attached to the characters. After the first few missions in the main campaign it feels very bland and repetitive. I was excited to do my first heist and plan it out. I could either go in smart, or loud and dumb. I wish they gave you more options for each big heist. You pick how you want to execute it and then you hire a few people to help you out. The better that character is you hire the more of the cut they get resulting in less money for you overall. I tried to find something in GTA V that would suck me and and hopefully change my opinion of the game. You can customise your character with tons of clothing, accessories and tatoos. You can fully customise your cars, buy a garage, and even properties. You can play darts, golf or even arm wrestle. If that is not your cup of tea then go do some racing. It can be on the streets of Los Santos, dirt biking or quading in the outdoors or even race on Sea-doos. You can even do a triathlon where you race on foot, on a bike, or do both!

Graphics:
The graphics in this game are outstanding. Each character is very unique with their own style. The animations for all characters, even the thousands of NPC's are very well done. There are a few very unrealistic animations when you get hit or die in the game. They look for cheesy and lame. Another thing I appreciate is the fact that most of the NPC's look different. Considering there are thousands of NPC's just walking around in the game amazes me. The weather effects are outstanding, weather it be raining, storming, or even sunny. The weather system is very realistic and well done. When you are near the ocean the tide rises and lowers as well. The night time visuals are colorful and full of life. The physics are unrealistic in the game but that's what you can expect from any GTA game in the series. There are also a few graphical errors in the game as well but you can expect that because of how big the game is. Overall, it is a beautiful game and should be taken notice. 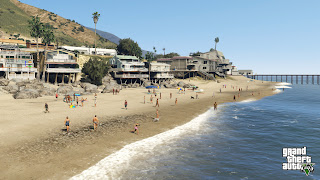 Sound:
The soundtrack in GTA V is huge. Like in previous titles you have a choice to choose between several radio stations while driving around in Los Santos. I was disappointed that there was no metal radio station in the game. I personally am a huge fan of metal. There is almost every other genre of music, even 90's pop which was exciting and my personal favourite. The voice acting is top notch. Like I said earlier, each character has their own unique feel to them and the voice acting makes it much more true of a statement. Every possible sound in the game is the real thing. From swimming, walking on the beach, running, biking, racing, and especially the cars all sound incredible. You can tell a lot of time was put into this area as well as the graphics. When I was playing the game I very rarely found some sound glitches like skipping while driving. This was very rare and again is expected in this type of game. Overall, great sound. 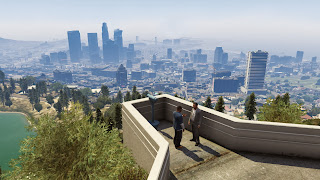 Conclusion:
My conclusion for this game is overall I did not like the gameplay. I enjoyed and appreciated the sound and the graphics with the game. I even enjoyed the story telling and how each character felt unique. I even grew attached to Trevor. He is a psycho path but hilarious at the same time. I know they spent $270 million to make this a great experience for everybody, and you can tell. I just think it had the same problem with GTA IV. It felt to repetitive, boring, and bland in some cases. Some of the main missions I hated doing with a passion and it really annoyed me that is was part of the main missions because I wasn't able to skip it like most of them. If you're a fan of the GTA series then you will enjoy this game. I am a fan of the series but the last two were both let downs. It is over hyped and the review scores are way to high. If possible try to rent or borrow the game before dropping $60 on this game.

Posted by codysreviews at 10:36 AM