Gameplay:
Finally! A 3D styled Pokemon game. We have been waiting for this for a very long time. Pokemon X and Y and the newest instalment in the Pokemon series. The route they went with is a fantastic one! 3D Pokemon! Something everyone has wanted. The gameplay for X and Y is the exact same as the previous titles. Where you collect 8 badges and challenge the elite 4. Like with every other Pokemon game you also have a rival, and an antagonist. In X and Y it is Team Flare. These guys are basically trying to destroy all of Kalos to get rid of all the selfish people in the world, and yes it would effect the Pokemon as well. Basically there is this machine hiding underground in one of the towns. This machine was built 1000 years ago by a man. He originally used this machine to revive his lost Pokemon Floette who died during the war 1000 years ago. Once the man succeeded he was filled up with rage of what happened. So he turned this machine into a death machine essentially and wiped out a big chunk of the Kalos region in order to stop and war and get revenge. This resulted in killing innocent Pokemon. Floette was very sad at what she had saw and left the man. To this day he has no idea where she is and is very sad. I will not go into any more detail without spoiling it. 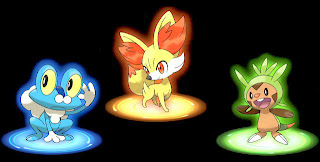 X and Y has the same model that we still love to this date. The Kalos region has 68 brand new Pokemon for you to catch. As soon as you enter the world of Pokemon you notice a huge difference. Everything is in glorious 3D! You start out by picking one of the three Pokemon starters to adventure with you. There are three new starters and they are Froakie, Fennekin, and Chespin. When you pick your Pokemon your adventure begins. I love the transition between the badges. You don`t fight the first gym leader until your Pokemon are in their 20's. In this new 3D world there is a lot more areas to explore. Each battle is unique because the Pokemon now have animations as they are in 3D. The moves all also animated making it feel much more interactive. There are also a ton of Pokemon to catch right from the start. You can catch Pokemon from all previous generations. What I love most about this game is the exploration. Since the world map is a lot bigger than previous Pokemon games there are a lot more areas to explore. Probably one of the biggest features that I like the most is EXP Share. EXP share is now a key item. When you turn it on, the Pokemon that you are using will get the full amount of experience (not half) and all of your Pokemon in your party will get half of that experience. So levelling if much easier and quicker. 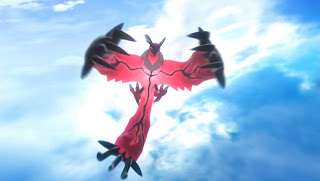 X and Y offers a ton of new features such as a way to interact with your Pokemon one on one. You need to use this if you want to evolve Eevee into Sylveon. If you use this on your Pokemon it will increase their happiness, and other stats. If they are maxed out that Pokemon will get bonuses such as more exp per battle, chance to get rid off status's like poison and sleep on it's own. Another cool feature is new new Wi-Fi features. When you are at home and say have a lot of friend on your 3DS using the friend code system. You can turn on the Wi-Fi within the game and immediately begin interacting with all of your friends. You can give a shout out, edit your personal profile so they can all see, view their videos, battle, trade, and even voice chat with them. On top of that you will see passerby's. This means when someone in the world is in the exact same location you are, you are able to see them and trade, battle, or interact with them. The other spot is for you acquaintances. You get these people on your list if you trade or battle someone randomly in the world or use the wonder trade system. The Wonder trade system is fantastic. You put up a random Pokemon and it will randomly find someone in the world to trade with. Now you both do not know what Pokemon you each put up for trade. So you don't ever know what you will get. They did the same thing with the battle spot option. Battle a random person around the world.

Another cool option to use is the trainer. You can train your Pokemon by playing games with them. There is a different game for each stat. If you successfully complete these games your Pokemon will get a small stat increase as well as an item. You can even win stones. This is basically an easy way of EV training. With X and Y you can finally customise your personal trainer. You can give them hats, accessories, facial hair, and new clothing. Each clothing store has it's own unique items that you can buy to customise your trainer. It has a lot of different options. With all of the new things added you will be easily putting 100 hours into this game if not more. A brand new feature added to X and Y are Mega Evolutions. There are 26 Pokemon that can use this new feature. In order to use it you much have their mega stone. These are activated during battles and only last for the duration of each battle. Each mega evolution has it's own unique look and gets a nice stat increase to help turn the battle around. 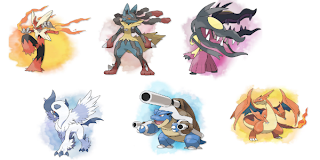 Some of the Mega Evolutions!

They are adding a new feature which comes out on December 27th, 2013. It is called Pokemon Box. It is a paid service but only costs $5 per year. What it does is stores your Pokemon onto a server so you never lose them. With this you can transfer pokemon from Diamond, Pearl, Platinum, Heartgold, Soulsilver, Black, White, Black 2, and White 2 into this storage system. This will allow you to then transfer them into your X and Y versions of the game. They also included this because X and Y have a limited amount of storage space in game for your Pokemon. There is roughly 13 boxes, so if you want to catch them all you might want to buy this service. Overall there is so much to do and explore in the Kalos region. You can even ride Pokemon like Gogoat or Rhyhorn! You also get a pair of roller bladed which automatically activates when you use your joystiq. Lots to do and is to much to do that I can't fit it all in my review.

Graphics:
As I said earlier X and Y are now in glorious 3D. It runs very smoothly with no frame issues. As soon as you leave your house into the Kalos region it plays a little cut scene which is perfectly done because it gives you the sense of the 3D. All of the battles are in 3D. All Pokemon are 3D animated and every move has it's own unique animation as well. Every time you walk into a new area it is different. You can see the lush and colourful environments and even see the grass blowing with the wind. The fly and surf animations look incredible as well. There are a lot of cut scenes in the game as well. They are all very well done and look incredible to watch. Even using the 3D option on the 3DS makes the game pop out. I can't say much more without you experiencing it for yourself. 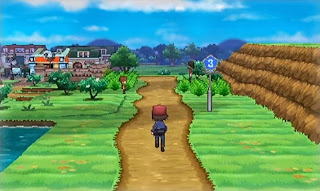 Sound:
The soundtrack is great in X and Y. The Pokemon centres have new music. The soundtrack for this game is great and you can tell a lot of time was put into it. The battle sounds are great when you use a move and the Pokemon cries are all awesome. My personal favourite is when you battle a Pikachu. Pikachu will do it's cry from the show "Pika!". One of my favourites has always been the battle music when you are fighting legendaries, or the final person in the Elite 4. Again, they are pure awesome.

Conclusion:
X and Y are here. These games are fantastic. There is so much to do, so much to experience. So much nostalgia. Any fan of Pokemon or RPG games in general will love this game. It is a must buy. Go experience this great new world of Pokemon. Go catch those legendaries. Gotta catch em' all!

Don't forget I also live stream!
Twitch: http://www.twitch.tv/aerialslayer
Posted by codysreviews at 11:46 AM