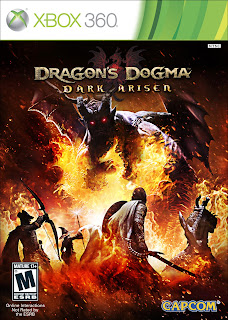 Gameplay:
Dragon's Dogma: Dark Arisen is two games in one. It has the original game as well as the Dark Arisen expansion which was released on PSN and XBL a couple of months before it came out on disk. DD:DR starts off in a small town where you create your adventurer. After the introduction cinematic you are put into battle right away with a Dragon. During the fight you are basically proving your worth. You have a crappy sword and you swing recklessly at the Dragon trying to defend the town. After a couple of swings and cinematic appears and he takes your heart. When he does this you have now become Arisen. You are basically immortal and never age. I am not going into the story because my reviews are not about spoilers.

The game starts off in a small town. In this small town you have a couple of options. You can jump straight into the main quest line and go out exploring. Or take your time and do some of the side quests. There are so much quests to do in the game, they seem to never end. Luckily in this version of the game you get all of the DLC included on the disk alongside the expansion. If I had to compare DD:DR to another game I would say it's like a face paced Skyrim. DD:DR has a lot to offer for a game. Some of the features include vocations aka classes. There are your basic classes you start off with which then leads into more advanced classes such as the fighter or a hybrid class such as the magic archer. As you're levelling you will gain vocation levels. These are like skill points for your specific class. The higher the vocation the more skills you can unlock for that chosen class. Each skill or augment costs points. You earn these points by doing quests, and killing monsters. One of the class features I like about this game is that you can go back to town and change whenever you want too. There is so much customization with the different types of classes. 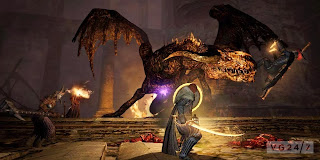 DD:DR also offers armor and weapon upgrades. You can upgrade your armor and weapons by finding certain materials in the world and using them to make your weapons and armor more powerful and weigh less. On top of that there are tons and tons of dungeons and areas to explore to get some of that juicy loot. There are tons of different types of armor and weapons you can loot as well as your basic items such as materials, healing items, etc... Another cool feature are the random encounters you experience in the world just by walking around. Could be an ambush, an escort, or even saving an NPC.

Some of the monsters in this game are incredible! From the small monsters all the way to the big ones like Chimaera's, dragons, gryphon's, and hydra's. Some of these monsters are incredibly hard and need some strategy. This game also involves an element from Shadow of the Colossus. You are able to climb on thse monsters and go straight for their weak points. These include cutting the hydra's heads off, or hitting the golem's crystals to bring him down. This game also features huge epic bosses and one of my personal favourites is in Dark Arisen. Where you are in the dungeon and you unchain a giant ogre, four times the size of the average ogres. Another cool feature is you are able to have a permanent companion with you that you create and customize. Alongside you and your companion you can recruit two other companions from characters online. These characters do not level with you and your companion which makes sense because they are other players. 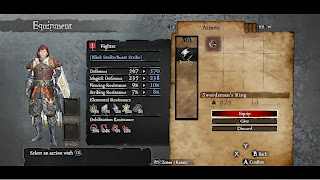 There is so much things to do in this game it is so hard to keep track. There are a ton of quests, tons of monsters, customization, etc... If you are a fan of RPG's, Skyrim, KoA, etc.... Then I highly recommend this game. It is one of my personal favourites.

Graphics:
The character models are not the greatest but the environments are beautiful. The spell effects, armor, weapons are all colourful, and have a lot of detail. The dungeons, caverns, are also very well done and feel that they are what they are supposed to be. The dungeons are dark, wet, creepy, big, and has a lot of details. 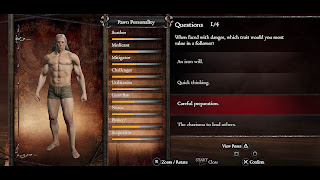 Overall the graphics are well done. Only complaint are the character models themselves. Other than that, gorgeous.

Audio:
The soundtrack in this game is fantastic. Everywhere you go has a new soundtrack to it. The dungeons, outdoors, boss battles, monster battles, cities, towns, villages, everything has it's own soundtrack. They all sound great.

Conclusion:
DD:DR offers a lot for a game. Lots of exploration, lots of quests, lots of loot, customization, a great story, and a whole other game. After you beat this enormous game you have to do the expansion which is almost as big and has a lot to offer. RPG fans will love this game. I highly recommend this game.