Tales of the Abyss

Gameplay:
Tales of the Abyss is a port from the PS2 version. I am very glad they ported it to the 3DS. I played it on the PS2 but it was so long ago and I was so young that I really didn't remember it to well. When I picked it up I knew I was in for a treat. Tales of the Abyss is an open world RPG title for the 3DS. If you have played any of the Tales games in the past then you will know the combat system is basically the same style. The combat system is not turned based but when you get into a battle screen it's a real time hack and slash RPG. You gain experience, level up, get to equipment. The same with any other RPG game. What Tales does very well is the use of strategy. You can control any of your 6 party members during battle. You can level up their skills, pick how they fight whether you want them to focus on healing or spell-casting or even focus on spell-casting until your TP (mana) hits 25%. This brings the combat to life more and great a challenge and avoids the repetitiveness. So overall combat is great! 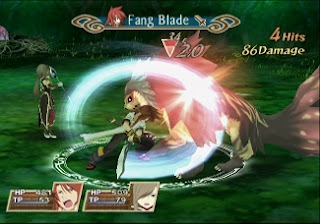 The visuals are great. The 3D in the game doesn't really do anything unfortunately. The cut scenes are well and have also been upgraded to a more sharper picture. The story line is very well done and will get anyone absorbed to it. There are a lot of twists and “WTF” moments in the game which makes it a lot more fun and interesting. The main character of the game is really annoying at the beginning of the game. He's a very spoilt brat who always gets his way. Later on it gets much better and a lot more bearable. The game offers about 20+ hours of game play if you do not rush through it. Another issue I had with the game is when your exploring and walking around the world map it really zoomed out and at some points on the map the frame rates drop drastically making it hard to avoid some enemies. Overall I found Tales of the Abyss to be a very enjoyable game. If you have not ever played Tales of the Abyss I recommend picking it up for the 3DS. If you have played it on the PS2 version or are a tales fan I also recommend picking this up. They did a good job with the port.

Graphics:
The only two problems I have with the visuals in the game are the random frame drops in certain areas of the world map and there is no 3D in the game. You turn it on and it looks the exact same. This is very unfortunate because I think for the cutscenes the visuals will look so much more better. The port from the PS2 to the 3DS was a good port overall. No dumbed down graphics or quality overall. The game plays the same as the PS2 version and is a very enjoyable experience. I recommend not rushing through the cut scenes and skipping them just to beat the game faster. Take your time and watch the cut scenes they are very well done, well animated and will absorb you as you unfold this epic story. The battle scenes are fast paced, look very well and has no frame drops that I have noticed. 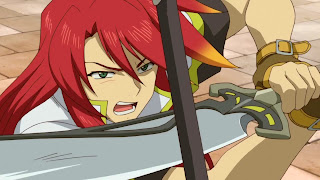 One of my favorite things to do during the battle encounters are using every party members special attack when they are available. They look so cool, bright, flashy and colorful. I also really liked the look of all of the spells visuals and skills. They all looked unique and suits the name of the skills. Overall Tales of the Abyss is a beautiful and colorful game for the 3DS.

Audio:
The soundtrack for Tales of the Abyss is fantastic. The battle music makes it like your endanger and need to kick some butt. The boss battle music makes the boss look more powerful and gets your adrenaline pumping. The music in each of the towns and the overworld map is soothing. Each town has their own unique soundtrack to them. They all sound great and very pleasing to the ears. Overall sound is top notch as well as the music.

Conclusion:
Tales of the Abyss is a splendid game. Yes, there are some small problems with the game but they aren't game breaking or will cause you to pull out your hair. It's very beautiful, very fun, interactive, has a great story and an awesome soundtrack. This port was very well done and hope to see other Tales games get ported to the 3DS in the future. There is a lack of 3D effects within the game and thought that the cut scenes would have looked a lot better and have a bigger effect on the story if the 3D was enabled for them. If you are a tales fan, RPG fan, or looking for a good game that will last awhile then I recommend you go pick this up. You will not be disappointed.