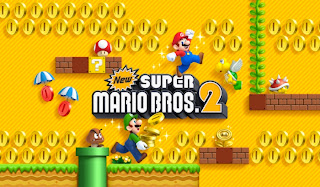 Gameplay:
New Super Mario Bros 2 is the second game for New Super Mario Bros. The original game debuted on the Nintendo DS hand helds. This one however is now on the Nintendo 3DS. The original NSMB was a huge hit on the DS because it was Mario, but Mario remade. It's basically Super Mario Bros. Remade onto the hand held systems. Everyone loved it. Now we have NSMB Wii and NSMB WiiU. The game play is your basic Mario plat former. You go through worlds, each world has a castle with a boss and when you beat the boss you move onto the next world. Not really much to explain more about the game play. However I had a few issues with it. Now it is a fun game don't get me wrong. But this game is missing a lot. The point in this game is to collect as many coins as possible. This is a nice new twist on a Super Mario game. They also introduced a coin rush mode into the game where you play a few levels that have a lot of coins to collect and a short time limit. The other nice thing about this one is it has DLC. The DLC content are new coin rush maps, one they included for free. When you get your one million coin goal all that happens is you get a new background on the game menu, that's it. Not really much of an award. 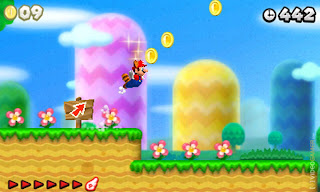 The Tanooki Suit is back!

The issues I have with this game is it is so plain. The backgrounds, the level designs, and the overall game play lasts only a couple of hours. Sure if your a perfectionist like me then you want to try and unlock all the levels and the star coins. But while your playing through the worlds or even navigating each world to your next level it's just so plain compared to NSMB for the Wii or even the WiiU. The environment in the Wii and WiiU titles are fun, interactive, and adds some life to the game. Compared to the first one on the DS, they really didn't change anything at all besides collecting coins. This I found was very disappointing. It's like they didn't care all to much about this game because they wanted to boost sales on the 3DS system because it is a Mario game. Maria game = sells a lot of consoles.

However when you complete the game you unlock Star world. I like the levels in Star World but when you beat the game and didn't really focus on collecting the star coins it's frustrating to try and go through these levels because it costs a butt load of star coins just to even go to the first level in star world. I do like how they added that feature to the game though. They do have a co op mode within the game as well where you can a friend can connect locally and play the game together collecting your coins or just plain and simple beating the game. I am happy they are sticking with the co op route of things even on the DS systems. Overall the game play is fun, just a bit upsetting with the lack of effort put into this game and the boring environments. I would recommend picking up Paper Mario Sticker Star before this game.

Graphics:
The 3DS uses the graphics very well in this game. The textures are crisp and it looks really good. The only problem which was mentioned up above is the plain environments and bad level designs. Almost all of the levels had a plain background and was really fast and easy to run through. Not a whole look of level creativeness in this version of the game at all. The animations on all of the enemies are great. Like in the first one the enemies dance to the beat of the music as they are walking. I still think it's funny when they hop around or swing their arms to the music. 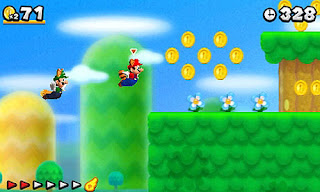 Audio:
The soundtrack is basically the same one used in the DS title. Most of the levels have a good soundtrack and goes well with the game but it is all just from the original game. All of the audio in the game is what you'd expect from any Mario plat former game.


Conclusion:
Overall the game is fun, just upsetting on the level design and environments. I mean go watch a video on NSMB for WiiU and compare it to the 3DS version. I wish I was playing the WiiU version is all I am saying. I do like the co op mode in the game and how you can also play as luigi. I also enjoyed the Coin Rush mode which you unlock after the first world is beaten. They have also included a free DLC coin rush map pack for free for a limited time to celebrate the anniversary of Mario. This map pack is known as the “classic map pack” because you play re designed levels from the original Mario games. They are also fun. If you are debating between NSMB or Paper Mario Sticker Star I recommend you pick up Sticker Star before this game.
Posted by codysreviews at 10:22 PM