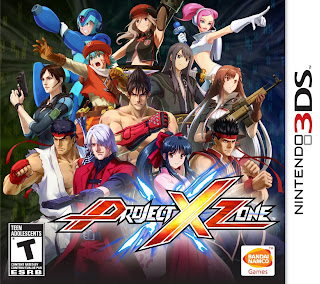 Gameplay:
Project X Zone is a tactical RPG for the Nintendo 3DS developed by Bandai Namco. The games story is played through chapters. In total there are 42 chapters in the game. After chapter 10 each mission is about and hour or so long. Overall it is a pretty long game especially if you take your time going through it. After you beat he story mode you unlock new game+ which allows you to keep all of your items but the monsters are a lot stronger and you gain exp a lot slower so levelling will be much more difficult. If you want the challenge then go for it. When you start the game you start off with very few characters but after almost every chapter you gain new companies to help you out. Each of your companions have their own move sets you can master to perform powerful combos. In total you get about 50 characters to control. Each of you're companions also get their own solo units as well. Solo units are additional units that you do not control. You call them in to do some extra damage and add on to you're combo. The higher you're combo the more xp you get. Xp is not the term for experience points. In Project X Zone xp is almost like mana. Every time you do some damage this bar gets increased. If you get it to 100% you can use a characters special attack. The xp bar also allows you to use you're companions skills which can increase your stats, or even an increased walking range. Solo units also provide your companions with extra skills which are useful. 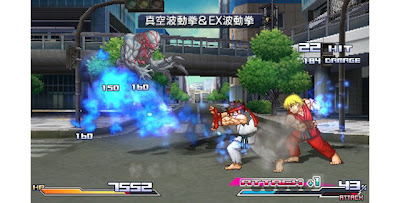 When you gain a level you get a stat increase like with any RPG. But when you gain levels you also unlock new move sets for your companions. Levelling is a key part of your adventures. You need these to be able to unlock more moves and more attack opportunities. You also learn skills by levelling. During the campaign you also get items and weapons from bosses and treasure chests which can be used to make your characters a lot more powerful by increasing their stats. The four stats that your characters have are HP which increases your health points, attack which increases how much damage you do, defence to take less damage, and tec which launches your enemies higher into the air to perform more combos on your enemies. Overall I really enjoyed the game play of this game. There are a couple of downfalls though. For example most of the levels you do are very repetitive and can be frustrating when you think you are almost done the chapter when out of no where 30 more enemies appear on the screen. This game also needed a lot more customization options, more moves and items to use or even a shop.

Graphics:
The graphics are decent. It is a tactical RPG so the character models are very small and do not have a whole lot of detail on them. What I do like about the graphics is that when each character performs their special attack they each have their own special little animations, some are 3D and some are 2D but overall they are great. The graphics during combat is crazy like with most cross over fighting style games. When you're doing the combos there is so much happening on the screen at one time especially when you call in support units and solo units to do cross over combos to increase your xp bar. There are no cut scenes in the game it is all mainly dialogue. 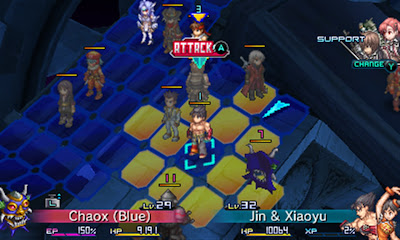 The 3D on the 3DS is good, not great but good. When the combat sequence begins the 3D can really hurt your eyes due to the fact that there is so much happening on the screen at one time. The 3D while you are moving your units around isn't anything to interesting. The only time you see the 3D effect well is when each of your character do their special attacks. When some of the characters do their specials some of them have 3D models so the 3D works really well with that.

Audio:
This is one of my favorite parts of this game is the audio. When you buy the game or pre order the game when the first batches come out you will get the limited edition box which includes a poster, art book, and the soundtrack. The soundtrack is the best part of the package because it has all of the music from the game itself. The music in the game is fantastic and goes very well with the game, and battle scenes. The audio overall from the game is crisp, sounds great and works very well with the game. 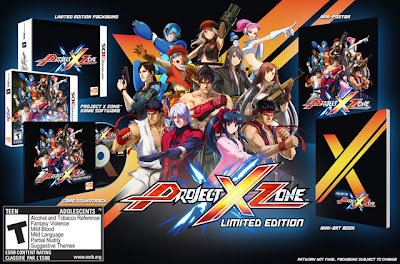 Conclusion:
Project X Zone is a really fun and enjoyable game. When you buy the first initial batch of the game you get the limited edition for the same price of $40. This is a fantastic offer because it includes an art book, a poster and the fantastic soundtrack. The gameplay is solid but is a bit repetitive and can drive you nuts a few times due to the fact that some chapters it seems like the enemies never stop appearing. Project X Zone is a fantastic cross over game, has a lot to offer and is an extremely long game. I personally put 49 hours into the game before I actually beat it. f you are a fan of fighting games, tactical RPG's, and cross over games then I highly recommend trying this game out.

Want to keep up to date with my reviews?
Facebook: https://www.facebook.com/pages/Codys-Reviews
Twitter: https://twitter.com/codysreviews
Posted by codysreviews at 12:26 AM