The Legend of Zelda: Ocarina of Time 3D (3DS)

Here is the review for The Legend of Zelda: Ocarina of Time 3D for the Nintendo 3DS as promised. Now I currently at work so I will post pictures of the game today or tomorrow.
Gameplay:
Well as you might have all guessed this is a remake of the original Ocarina of Time for the N64. Now some people think that this is "just a port". Well actually it's not, what I love about the remake is it's an actual remake. What I mean by that is they updated the graphics for the 3DS so it looks much better. The animations for link and several other characters have been redone so it looks somewhat real and very smooth. The environments have been redone as well making it look simply stunning. OoT runs the same as the console version. You collect 3 medallions become and adult, awaken all of the 7 sages, save Zelda, own Ganondorf. Obviously it's the same story but they made the experience so much better. For example they added it so you simply press on button from the item menu and assign it to the button immediately. This makes the water temple a lot of toleralable as in you can instantly equip the iron boots on the fly. They added a gyro feature for the 3DS where you can move the 3DS (not the stick) to aim with the bow or slingshot. Now this feature works well with the 3D but it can be very annoying when using the equipment. Luckliy you are able to disable this feature. I know I did. When you beat the very enjoyable campaign you unlock a new mode for the more advanced players called Master Quest. Now this was introduced with the gamecube anniversary addition. What Master Quest is, is you simply start a new game but EVERYTHING is in reverse from the original gameplay. What I mean is when you start the game the great deku tree is to the right.....well now it is on the left side of Kokiri. It makes advanced players a bit more confused in some of the dungeons adding it that extra challenge. Luckily that is not all Master Quest offers. The enemies do double damage and the dungeons all have new and more difficult challenges to them. The bosses are still fairly easy. Remember this mode can only be unlocked when you beat the game once. The remake relives some of your childhood memories as a gamer. I loved it and I am so glad it was remade. You can now experience the legend in glorious 3D, which I will talk about in the next section. 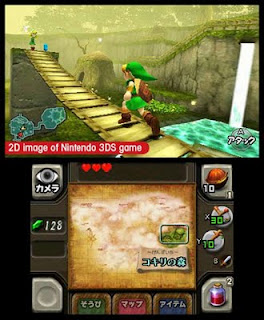 The Interface.
Rating: 9.5/10
Graphics:
Well as I stated above everything was redone. The animations, the graphics and the environmental graphics as well. It looks so much better and runs so much smoother than the original. We'll get to the 3D in a moment. I find by them redoing all of the graphics it really makes the experience that much more enjoyable. There is a couple of flaws that I noticed with the graphical update while playing through. Some of the backgrounds in the environments have not been redone and still look like the flat old 2D background as in the original. One other thing is the stairs still don't really look like stairs but the flat lined surface it was in the original. But these 2 things do not bother me at all as I believe it's the gameplay that makes the games not the graphics. Now the 3D in this game is spectacular. I know the launch games for the 3DS didn't have the greatest 3D effects as in as soon as you move the DS or move your head it takes a moment to find the 3D again. No not this game. I love as you run through the forest with the 3D on you see the little specs floating around you and it actually looks like they are flying right at you and gives you a relaxed feeling. Another thing I loved about the 3D was some of the cutscenes and the new enviroment looks. One example is at the beginning of the game where you are talking to the Great Deku Tree. When you have the 3D on for that scene it is amazing. Link is standing in the foreground as your talking to the Deku tree while he is in the back. It is a great dynamic view. Another one of my favorites regarding the 3D is when you run across the bridge in the forest to get the rupees and speak with the girl. If you have the camera angled just right with the 3D enabled you can see the entire forest and it looks amazing in 3D. Overall the graphics and especially the 3D in this game are truly breath taking. 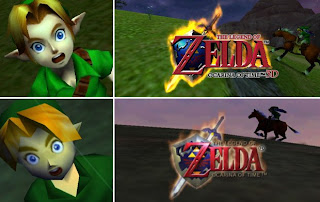 Before and After Images.
Rating: 9.5/10
Audio:
The audio in this game has always been great. This game has simply one of the best soundtracks in gaming history. It is truly amazing how Nintendo spent the time with the soundtrack. All of the great songs from the original are in the remake but it sounds so much better. From playing your ocarina to roaming in Gerudo Valley (my personal favorite) you can relisten to all of the orignal music. This is one of my favorite things in OoT is listening to the music. If you took the advantage of buying OoT on release then you were qualified for a the entire soundtrack of the game. I know I got my 60 free songs! The audio for the monsters and the bosses are all redone as well. The sounds are all really impressive as always. 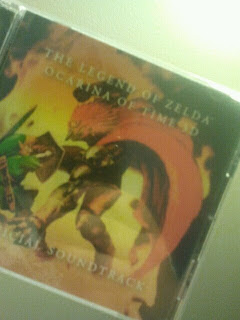 The Soundtrack!
Rating: 10/10
Conclusion:
This is better than the remake. They updated the graphics, the menus, the animations, the audio....basically everything. They even added a Master Quest to the game which offers a great challenge to the game for the advanced players. I highly recommend everyone gets this game....you will NOT be dissapointed I promise. Relive your childhood and experience the beauty of OoT. Enjoy and thanks for reading!
Overal Rating: 9.5/10

Posted by Aerialslayer at 5:18 AM

Email ThisBlogThis!Share to TwitterShare to FacebookShare to Pinterest
Labels: The Legend of Zelda: Ocarina of Time 3D