Gameplay:
Family Guy Online has been advertised for some time now. They have recently started doing small sessions for a closed beta. I was lucky enough to get into one of those betas. Family Guy Online is an online game that you play in your web browser. You start off by creating your character. As of right now there are 4 different character types to choose from. They are Stewie, Lois, Peter, and Chris. There is also another character slot that is blanked out and by looking at the portrait it is Bryan. I assume when the game is out of beta you will be able to create a Bryan type character. Now each character type has it's own speciality for example Stewie is able to deal massive amounts of damage because that is one of his skills. When you decide to choose what character you want to be you are now able to fully customize the character of your choice. Whether is be shirts, eyes, mouths, or your nose and you customize everything. There aren't a ton of customizable items as of yet but it is enough for now. When you are finished are are brought into the game. You start off in front of the Griffin's house on spooner street. Your first quests begins with Peter Griffon where he asks you to talk to Chris Griffon on why he does not want to go to school. From here on out you start to do quests to earn money, experience, and vanity items. 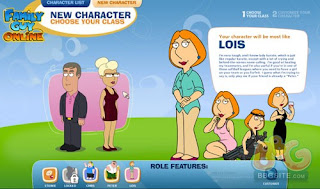 As your questing you will find random items laying around that may or may not look familiar. For example you will find a tennis ball. When you click it the ball gets added to Bryan's collection. So you can collect important items from the Family Guy universe and add them to each characters collection. The town of Quahog is pretty big. You start off in the urban area aka. spooner street. When you have done all the quests or enough quests you are able to move on to other parts of the town to explore. Overall the map is a pretty decent size to walk around and explore. In Family Guy Online you are also able to interact with many other people in the game as well. In the beta the chat was not working so hopefully that will be fixed when the game is released. Despite all of the bugs in the game (see down below) Family Guy Online is a decent experience. Not great but alright.

Bugs:
There are several bugs in the game that I noticed while playing. For one some of the audio likes to overlap other audio within the game. The quest where you go into the other universes through Stewie are all bugged. When I did this quest I was stuck in the Asian Griffon family house. There was no way out and no NPC's to interact. Another big one is the constant lag. Some parts were alright but every minute or less there was lots of log and lots of loading. There was another bug where if you clicked on a emoticon or quest item it would not activate or respond. This bug happened to me a lot. Yes, there are a lot of bugs in the game but this is why they do beta tests to find all of them and fix them for the release. 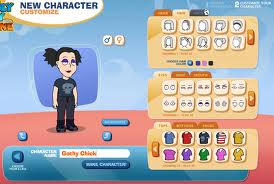 Customize your character! (Not my character)

Conclusion:
Family Guy Online is a game where you play for 30 mins - an hour at a time before getting bored of it. It is meant for casual players. You can tell just by playing it. I did however find it neat that I was able to explore and experience Quahog virtually. I love the show and there are a lot of little easter eggs through quests that fans of the series will pick up right away. The game is still in rough shape and still in the beta process. They are doing multiple beta tests to work out all of the bugs so it will be fresh on launch day. Overall it was a nice experience and looking forward to getting into the next beta test.

**Note**
This review will be constantly updated as further beta tests are implemented. This is not the full review just my thoughts on the beta as of now.