Well I decided to do a review on Alien 3 for the NES. Just recently I had watched the third Alien movie, Alien 3 in the Quadrilogy. The Alien Universe has been a favorite of mine since I was a little guy. I kind of looked up to the marines, because they were so bad*ss. Well in Alien 3, Lt. Ellen Ripley was the main character, as is the same in this game. So now it is time to see how this game lives up to the movie... As we all know movies make bad games, and games make bad movies...
[PS Forgive me for my bad screenshots, I will need to invest in something better than MSPaint]

Gameplay/Controls:
First off I was kind of confused about how Ripley starts off on the surface of a planet armed with a Pulse Rifle. I love how this game already starts off completely messed up. In the movie Alien 3 Ripley crash lands on the planet Fiorina 'Fury' 161, an old foundry which is used as a prison. I can see how it kind of looks likes a foundry on the first opening scene, but aliens running around on the surface? Come on. This games controls are horrid. Completely garbage, like I mean, you can’t even aim up and shoot the aliens in the ceiling? You can throw grenades which is kind of cool, but you throw them like a handicapped sloth. The grenades, they get tossed about 3 feet in front of you. Last time I checked the shrapnel and the shock would probably kill you at that range.


The other thing that is frustrating about this games gameplay is it’s a race against the clock to save people who were face hugged? Either way you save someone after they have been face hugged their dead anyways. As there is no technology to cryo-freeze them to keep them alive until the embryo of the Alien was removed. Another thing how does Ripley have access to grenades and weapons to begin with? In the movie there were no fire arms, explosives etc. The other thing I have beef with is that, why does this game suck so bad? Well continue reading on.


The controls are horrid like I stated earlier. You jump like your slam dunking a basketball. You fall down when you get hit by an alien, than you teleport back into the standing position. Thats orignial. You can also get knocked down the ladders by the aliens too. In which you lay there, than teleport back into standing position. Also where are all the prisoners in like in the movie to help you kill the hybrid "Runner" alien? So this game is completely wrong!  How is there multiple "Aliens" in this game? The game is called "Alien 3" aka single not plural! In later levels I suppose you fight "Praetorian" or "Warrior" Aliens due to them being bigger and more bad*ss than the smaller ones. Not to mension theres eggs and facehuggers in the game, which would claim there is a queen laying eggs and the drones are doing their job. This game should have been called Aliens because it follows the the second Alien installment, you guessed it, "Aliens".

Like I had stated, the controls are horrible, and the gameplay is the same thing over and over.

[Trivia Time! In the Director’s cut of Alien 3, a facehugger actually impregnates some sort of bovine creature. Than when the alien is born, it gains some of the DNA structure of its host. Thus replicating a stature, or structure of its host. In most cases we see drones which are usually spawned from human hosts. Minus the one which was born in the way a human gives birth in Alien Resurrection. In other cases such as Alien VS Predator, and AVP 2: Requiem [The Movies] At the end of the first AVP, this theory is proven correct once again, as there is a Hybrid Alien; the Pred-Alien. Also the Theatrical release of Alien 3, the facehugger gets a hold of a dog instead of the bovine.]

Graphics/Background:
Wow so entertaining, the game looks drier than, well I don’t even know. The screens before each level begins suck too. Well the graphics seem ok for this game. It’s nothing special at all. The flamethrowers flame animation looks like complete garbage. The animation of Ripley tumbling down off of things is well done, but too bad it does nothing to help out the gameplay at all. The aliens look decent for their sprites being like one shade of color, and all the explosion animations look like crap. Nothing much else to say about this other than the background has random black holes in the walls in the first stage. This was over used waaaaay too much. They could have at least used a few different sets of backgrounds instead of the same thing over and over and over again. Not to mension Ripley looks like a employee of a santation department for a city. Aka Garbageman. 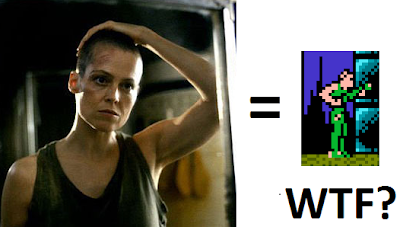 BGM/SFX:
Well I never thought I would say this, but this games music is ok. Aside from all the other crap, the sounds are somewhat decent. You can tolerate it for the most part. The BGM isn’t that bad, the SFX are ok, and the guns sound something like they should. All in all nothing special at all.


Uniqueness/Creativity:
Like I said before I started this review. Games make bad movies, movies make bad games. It seems this is a true statement. Look at the terminator movies, the games all stunk more than rotten egg farts and beer, same with the movie Doom. The Doom games were way better than the movie. At least the Doom movie had some ideas from the games, mainly the third one but not all of them. This is why Alien 3 on the NES gets its balls busted due to it following nothing from the movie Alien 3.


Closing thoughts/Statements:
All in all this game is bad. Waste of time. I wish I had the 3 hours back that I wasted on this game to review a different game, but this is what I enjoy doing. Saving people from wasting their time on bad games like this. In all of my reviews, I do my best to either beat the game, or get damn near close to it. This game I got fed up with saving people who are doomed anyways. I took one for the team and played this horrid, putrid pile of turds...

I guess the Aliens won because I did not finish this game. Bow down to them. All our base are belong to them!!