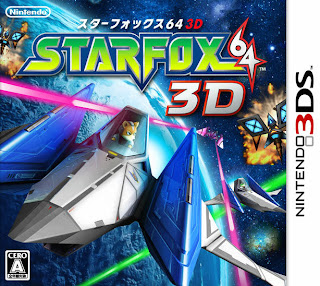 Here is another remake of an amazing classic put onto the 3DS system.

Gameplay:
Star Fox 64 3D plays exactly the same as the original for the N64. What I love about this is it is like OoT for the 3DS. What I mean by that is they actually updated the graphics and added new features to the game to keep it refreshing. Now they story overall is very very short. I mean in roughly an hour you can beat the entire story. That is the only issue I really have with it but I will focus on the cons in a bit. Lets talk about the Pro's. Star Fox 64 3D is a great addition to the 3DS system and another great remake. Embark on your journey to destroy Andross, the evil mad scientist. In Story mode you navigate through the different planets or missions and progress through the story. What I like about this is when you beat a mission you don't have to go on a straight path onto the next planet. They added it so when you beat a mission you can go ahead and do an alternate mission instead and progress the other way. Another thing I have always enjoyed about this game is the alternate routed you can unlock in mission. The first mission (Corneria) is a prime example. If you save falco and then fly through the hoops in the water and if you go through all of them Falco will compliment you on your flying and then tell you to follow him. You follow and space ship and go through an alternate route through a waterfall. When you beat the boss in the alternate route you actually unlock the other missions and gives you the opportunity to fight Star Wolf again and go to Venom 2 where you fight a harder version of Andross. The story is the same, missions are the same.

They did add other modes to the games. They added a score attack mode where you pick a mission to go through and it's basically trying to see if you can beat your scores. By score I mean how much enemies you can kill. If you kill a certain amount of enemies you earn medal. Bronze, Silver and Gold.
Another mode is the Battle mode. This mode you can face CPU's or some friend in a battle. There are different modes within battle mode such and score attack, and survival. The only issue I have here is that you can only face friends via DS download play, no online play at all. So battle mode is only fun if you want a small challenge and kill some CPU's.

One thing I should mention in the campaign is that there are two modes to choose from. The modes are Nintendo 3DS mode or Nintendo 64 mode. The Nintendo 3DS mode is a mode that uses the Gyro feature in the 3DS. Which means when you tilt your 3DS you ship will turn that way. You use the gyro and the stick to control your ship. The Nintendo 64 mode is based off of the original gameplay. Standard stick and button gameplay like in the original. 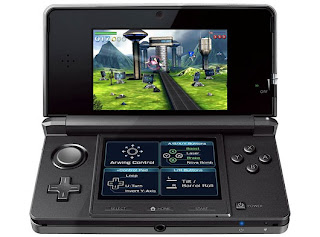 Graphics:
Yes, the graphics are and have been improved in Star Fox 64 3D. They updated all of the graphics for the 3DS and it is a very nice update. The environment, characters, effects, ships, etc... is all updated and looks a lot better than the original version and makes the gameplay a little bit more fun to play.
The 3D is also well done. The only issue is if you play on the Nintendo 64 mode and you try to view it in 3D you will be moving your head a lot to see the 3 D effect. If you play with the gyro controls then your head will already be moving with the ship so it keeps the 3D effect. 3D looks great overall and really works for the type of game. 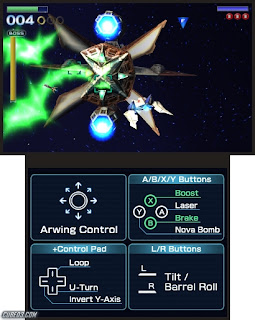 Audio:
Well not much to say about here because the audio is the same as in the original. The music is the same and all of the sound effects are the same as well. They did however update all of the audio to make it sound a lot more crisp and clear. With the graphical update also came with and audio update. The voice acting is terrible (like in the original) and the dialogue still sucks. Also Slippy is as annoying as ever. 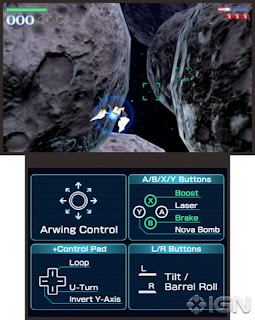 Conclusion:
Star Fox 64 3D is a wonderful remake for the Nintendo 3DS. I have so happy that you can experience this game again like you did in your childhood. Although a great remake, it also has some flaws. For example the gameplay is way to short, as in 45 minutes then you beat it. The extra modes really do not make up for the short gameplay because your constantly re doing all of the missions which can get pretty boring really fast. If your a Star Fox fan then you will enjoy this game.