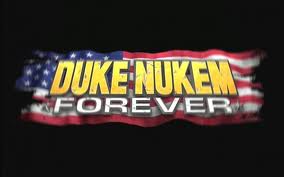 Gameplay:
Alright I know you have all heard the terrible reviews. Well don't listen to them, if you are a Duke fan you will love this game! I am typing this to you as the end credits are rolling lol. Yes I just beat the game this is why I am doing a review on it right now. Anyway lets start shall we?

So the gameplay in Duke Nukem Forever plays like Duke Nukem 3D. You obviously play as Duke Nukem and your goal is to kill the cycloid emperor because the aliens are stealing the hot women from planet earth. I am not getting into details about the story but basically that is the short version. So in Duke Nukem Forever you only can carry two guns, like any newer FPS. You always start with the Gold Pistol which I recommend you keep during the whole game because if you do you get a whopping 50G achievement or Trophy called Gunslinger for doing so. The game is actually medium in length and somewhat difficult like Duke 3D was. The game is hilarious and there is tons of interactivity in the game. You can drink beer to toughen yourself up, take steroids to enter roid rage and destroy your enemies in one hit with your fists, holo duke is back and funny as hell, and you also have a pair of nightvision sun glasses. The game has just over 12 chapters with most of them having 2 parts to it. I think the game should have been a bit more polished as in due to the low FPS rate and at some areas the FPS drops next to nothing. Within the game some of the interactivity includes a pinball machine, drinking, peeing, throwing feces....yes feces, lifting weights, punch punching bags, grab a pair of smokes, condoms, sodas out of the soda machine. The list just goes on. There are also a lot of easter eggs within the game that I had to laugh at. For example in the second or third chapter a soldier tells you that there is some armor and a power suit in in the crate that you can grab to get ready. When you go up to the crate you grab your ammo and then you will see a spartan suit (master chiefs outfit) from halo and when Duke see's it he says "Power Suits are for pussies". To wrap it all up Duke Nukem is back and he is as funny as ever. The gameplay is fun as hell, and there is a nice challenge. When you beat the game I recommend you look at the extras there are some amazing things in there. 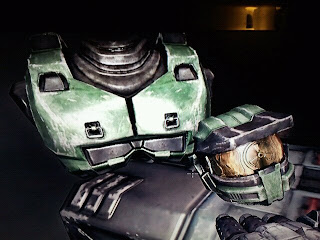 "Power Armor if for pussies" (taken from my cell phone)
Multiplayer is pretty neat. Not really a big point in the level up system but you can unlock items for your mansion and redecorate it. I personally enjoy the multiplayer aspect of the game. There is one things that really drives me nuts and it is the load times from each chapter. The most annoying part is when you die and you have let the whole chapter reload again and it takes forever!!


Graphics:
This one isn't going to be that long because yes the graphics are from 2008, and they are outdated but if you know from my other reviews. I don't care about graphics. Gameplay is where it is at. Anyway they are outdated as stated before, the are a lot of low FPS drops during gameplay some of the characters look bad. The animations for duke nukem aren't good at all. If you watch him jump and walk in a mirror the animations look terrible. 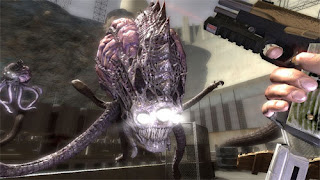 Try taking out one of these with a pistol.

Audio:
Yep the audio is back! To begin all of duke nukems famous quotes made a return as well as some new ones. Some of the quotes even include video game spoofs. Such as Dead space, Halo, and Mortal Kombat. The music is really well done and the sound effects from the enemies are roughly the same as Duke 3D just updated for 2008. The sound of the guns shooting is neat, especially the ripper gun. Sounds like...well your ripping it up.


Conclusion:
Duke Nukem is back and kicking ass as always! If you are a Duke Nukem fan I recommend you check this game out. It is fun as hell and has a lot of humor for everyone to enjoy. If you aren't, just give the game a chance, play through the whole game before making a solid judgement. It's been 14 years, give the guy a break. 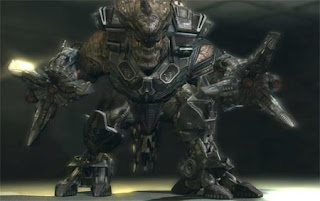 The final boss!
Posted by Aerialslayer at 1:18 AM