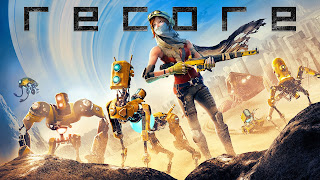 ReCore is a pretty fun game overall. This is the first game in the Xbox Play Anywhere program where you buy the game and you are able to play on PC as well. ReCore introduces some really cool mechanics but falls short on executing them in a way that makes it exciting. The world is just way to big for all of the back tracking that the player has to do. It wouldn't be so bad if there was a lot more to explore and do in this huge open world but there is not. The prismatic core system is fine at first but gets really dull very quickly due to the fact that you need a certain amount in order to even progress through the story and finish the game. I kept running into problems where I would hit a wall because i did not have enough cores, mainly because the leveling progress is kind of slow so some of the dungeon you would just ignore because you were not the required level. 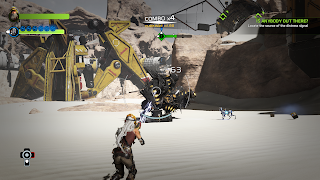 There are some positives overall with the game though. It has new and interesting mechanics that you never see in a video game. Like the ability to change your ammo type based on the color of the enemy. You match it with their color and it will do more damage overall. When an enemy is weakened you are able to extract it's core with you use to power up your companions, Or you can choose to kill them regularly and get the materials you need to upgrade your companions armor. The customization is pretty good overall and if you craft a set for one of your mechanics then you will get a bonus to that character. It might be finding more loot and making on of their attacks stronger. The platform mechanics are very well done as well and feels like a fast paced 3D platformer. The companion system is good with full customization between four different bots and three different cores. Each companion has their own special techniques. Seth can crawl up rails, Mack can find items hidden in the ground, Duncan is able to smash through rocks and the FL1-R is able to fly you over longer distances and use vents to get boosted up in the air. 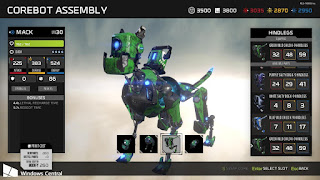 ReCore suffers from a lot of problems from glitches and the dreadful load times. It is a bit better on the PC overall but still has the same glitches in the console version. Load times and visuals are superior on the PC version but doesn't help it very much at all. Overall ReCore is a a good game and with just a bit more development time this game could have shined.

**UPDATE** ReCore received a patch update and the load times are now better. Still not very quick but better than it was.

Posted by codysreviews at 3:49 PM

Email ThisBlogThis!Share to TwitterShare to FacebookShare to Pinterest
Labels: ReCore