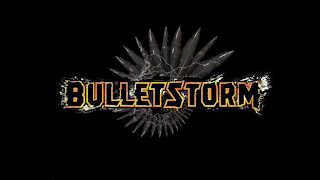 Gameplay:
Bulletstorm is very unique and different than any other FPS. Now Epic games is the creator of Bulletstorm, therefore, it is running on the Unreal Engine and is very similar to the Unreal series. What makes this game different from the Unreal games is the fact that you "kill with skill". What I mean by that is if you kill an enemy with a skill kill you get points for it. In the campaign there is an in game currency which allows you to buy ammo, charges, ammo upgrades and charge upgrades. Charges are basically ammo for the guns secondary shots. For example if you have the shotgun and press "RB" opposite button of the leash you are able to switch to the shotguns secondary shot with unleashes a supersonic wave which vaporizes enemies. There are over 130 different kinds of kills which will earn you more points. Each gun has it's own list of skill kills including environmental skill kills which can all be accessed pressing the "back" or "select" button. The game can be fairly short depending on the difficulty you are on. I beat the game on normal in about 5 hours.If you play on a harder difficulty and try to find all of the news bots and whiskey bottles then it will take you much longer. During the campaign there are some pretty cool quick time events. If you hit the correct buttons, depending on your reaction time, you are rewarded with a large amount of points, but if you do not hit the buttons at all your action will still process but you will not be rewarded with any points. 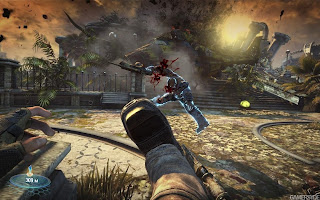 Right in the face!
Now the only problems I had with the game was that most of the vulgar language was completely unnecessary. The language did not bother me at all, it was just too much and overused at some points in the game. Some of it is hilarious and used at just the right moments but most of it is overused. Another problem I had was it was a little bit to short and some stuff just happened was to fast. The story is good but stuff happened to quickly and the game was too short.
Overall:
9/10

Graphics:
The game like I said earlier is run on the Unreal Engine as the graphics are very well done and the environments are absolutely breathtaking especially when you are walking up towards the water dam. The visual effects in the environment are well done as well as in the water effects, background environment (ie. nature, animals, etc...). I also really enjoyed the visuals of the guns. When you use the big guns it actually looks like it hurts. When you activate the guns secondary your screen and controller will vibrate giving you that feeling of power. The enemies are really cool as well and are all very unique. The animations, art style, and animations as well as special effects are nicely one as well. 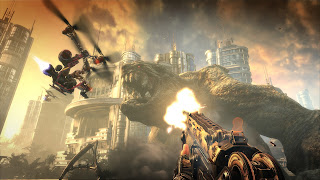 Damn he's big!
The only bad thing I can think of is during some of the cut scenes where Trishka's hair would randomly flip in the air which catches you off guard. Some of the cut scenes also have a lag or drop in FPS issue where it rarely gets choppy. Also there is a rare and not noticeable cut scene where the animations look cheesy.
Overall:
9/10
Audio:
The audio in Bulletstorm is exceptional and is very well done. Lets start with the music. What I really enjoyed about the music is that it gets your adrenaline pumped especially when your in a big battle or big moment in the game. When these events happen in the game the music will pick up and has a metal sound to it where it is fast paced just to give you that "Epic" feeling.
The voice acting in Bulletstorm is very well done as well. Gray which is the main character almost sounds like Jack Nicholas. Not much to say about the voice acting but that it sounds great. The enemies don't really talk but some of their screams sound scary as in when they yell or chase after you....RUN!!! Even the sound of the enemies exploding or being ripped to shreds sounds gruesome yet is very satisfying because you killed them "with skill".
Overall:
9/10
Conclusion:
Overall Bulletstorm is a must get game but please consider the ESRB rating, M for Mature. I say this because this game has already gotten enough of the media on their backs because parents cannot control their kids. Bulletstorm is a very fast paced and wild game. The kills are gruesome, fun, funny, and very satisfying. When you beat the game make sure you go and beat Echo Mode as well. If you are a fan of the Unreal games or even an over the top FPS fan, go and please pick this game up.
Overall Game Rating:
9/10
Posted by Aerialslayer at 7:41 PM